Mothers day weekend was a hoot

Well 2 weeks ago we made arrangements for us to go camping with some friends but they seemed to fizzle out when it actually came down to meeting us out there... that's OK we had a really really good time out camping without the company of our friends out there... we got out there about 5 pm Friday nite then hit walmart down south and picked up some things that we had forgotten to take...
Saturday morning I woke up at about 7ish am and Sandi woke up about 8, we woke Nate up at about 8:30... He didn't seem to care, or rather didn't realise the time. We ate a couple hot dogs cooked in aluminum foil and covered with coals from the breakfast coffee... we left the camp site about 10 AM headed to the bait shop at the resort.. they were fairly overpriced but we needed live bait especially after being told that the crappie were only hitting on minnows, and Sandi had been wanting to be use minnows for some time this season so I picked up a dozen; however, the red wigglers when I opened them I noticed that they were frozen solid... took them back and wasted about 20 mins getting new ones... all we caught were a few large mouth bass but were well under their size limit, but Nate caught a very big blue gill.
We got back to camp with 3 fish about supper time and only had 3 because some one gave us 2 very large crappie.. we desired to be a bit different and wrap them in foil over the grill but I burned the blue gill... Nate lucked out cause he doesn't really like fish anyways.
Sunday or rather Mother's Day, we awoke early again, but we hung out around the campsite until about noon entertaining Sandi with me and Nate having a projectile fight throwing tree gulls at each other and chasing each other around the campsite.. after which we went fishing again .. Sandi caught a whopper 12 in crappie along with a about 7 more keepers while I only caught about 4 keepers... after we ran out of what minnows we had left over from the day before, we headed back to camp, I cleaned the fish while Sandi and Nate started on gathering our gear. As I started taking down the tents  Sandi tells me it was the best mothers day ever.
I am so glad it made her happy and that she had a good Mother's Day...
Until next time
~W 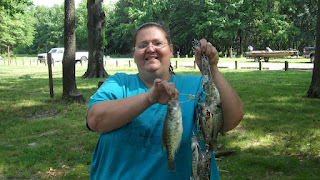