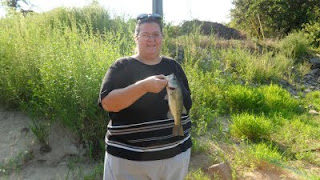 We went fishing yesterday, I had recently bought Sandi a new fishing pole, and she bought herself a new "floatie lure" (there's a story there I may tell later). She wanted to test out the new pole so we went to a fishing spot that I was told about being less that a couple miles away.. I was using the new sunfish pole she bought me(a take down carbon fiber version of a cane pole basically) and had went to a section a distance away and almost fell in the water. About that time she yells out "Hey Brad! I got a fish!!!" When I get down there she has this beautiful bass that she is wrestling with..
all in all it was a good day yesterday... As for me, I have been using the new E-reader that we rented for an evaluation. I have been reading "Way of the Bow" by Paulo Coelho so far its a really good read.

Every day I have been practicing with the new compound bow and can hit my target rather easily so long as it not more than 30 yrds away... im still working on shooting from a farther distance and think I may hit the target area after this next pay period.. i don't know yet.. I don know that deer tags go on sale next week and think i may get those after I get paid.
Posted by Whysprs at Saturday, August 27, 2011 No comments:

Wow, I know I can post from my phone and all, but its just not the same.

Friday, I went and bought an old compound bow (Fred Bear polar II) for $40 from a guy that deals sells alot of them apparently... He doesn't get online or anything and does his selling and buying the old way. If some one reads my blog and wants his number ask and I will let you have it...

At work I have been doing extra hours until they get the one new person trained and hire another one, apparently one of the residents scared the one new girl so bad that she quit on the spot.
Posted by Whysprs at Wednesday, August 24, 2011 No comments: