Leap trade is a place to trade videogames over multiple platforms with other gamers to recieve games that you havnt played before.. I have been using it since May of this year and have added so many games to my collections now that its not even funny.


This is just a few of the games I have traded for over the last few months.. and it all started with me trading off only a couple of games and has turned into this... 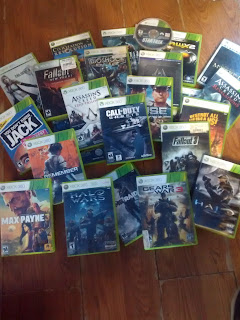 Posted by Whysprs at Wednesday, October 21, 2015 No comments:

Its been a while..

I'm trying to get back to posting again, and just haven't had the time or initiative to write in some time.

I'm sorry I haven't posted and I know I have some readers quite often but just haven't felt like writing; which, is the entire reason I could never monetize my blog. But that is far and between anything at this point.. So let me catch you up to speed.

We bought the farm, got animals, and attempting a more simple life.. the garden was a big flop this year.. perhaps next year it will be better, I've been dropping fertilizer on it often from the chickens and rabbits the last 2 months.

Chickens completely quit laying because of some night visitor (the sad side of this is that the person took my porcilin eggs and then brought them back the following night, not just once but 3 times) that was stealing eggs, and we had no eggs for about 2 months. And if you don't know, its just so horrible to have to eat store bought eggs once you have been eating eggs that you have collected from your own chickens..

The same visitor took 4 full grown turkeys as well.. Everyone as in neighbors around here keep trying to say its coyotes; however, what they don't see is that a shoulder high fence was pushed all the way to the ground at a fence post which I had to disconnect and pull back up. Also there were no signs of struggle and no feathers spread about.. it was almost like they were completely abducted and never existed, an animal attack would not be like that.

Anyways, time to get ready for work.. Have a great day!!

For those with an ear let them hear

Had something that has been sitting hard on my heart for a fee days now.

I don't understand what has happened in your life, I don't know for sure what made you step away from Jesus, he wants a relationship back with you, an example to you.. You still love your child even though they reject you, God is the same way, He is THE FATHER and will never fail you... Even if other churches out there have failed you and man has failed you and religion has failed you... God is still there for you. I pray for you every night for you are my brother in Jesus..

To another, be watchful and decern the things around you brother, you are over your head for you have forgotten to pray about the situation before you jumped into it, but God has given you that way out that you seek if you look for it as he has done so many times in the past.. I pray for you also my dear Brother that you may see the light and come back onto the path....