Well the past couple of days I have had several text mesesges that have been interesting to say the least. To start out I was contacted by one person saying they had a personal assistant job for me, it was an answer to my Craig's listing. The odd side of this one one was that when I texted them back they said contact me Imediately for a job, so I did.. they wanted me to process money into my bank account, simply put it seemed to be something of the old Nigeria scam.. so that was the end of that one. Last night I received one that said that they wanted me to process cashiers checks and western union money grams... I stopped there, but looked it up today the company thy say they were representing was a clothing outfiter based in another country with the closest one in Hawaii the text came from Macon,  Ga. Now today im contacted by a place that claims to be a major pharmasudical company... I colled them and told them what was going on and oh boy were they not happy.. apparently I was the 19th person to contact them about the same deal. This person wanted me to work for them saying that I would get paid $20 an hour doing data entry and working on software, also processing orders or making presentations with excell... seems funny about that part for sure.. but the spin was rather awesome sounding .. I was almost peeking an interest...made made a shot though and got an email address from the person as well to contact this same person... supossedly I will be contacted soon by the investigator and will give him my findings on this guy... anyways gotta go.. but will leave ya with a cute picture..
~W 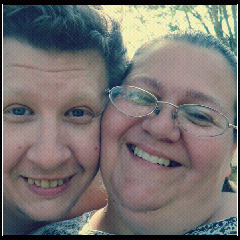 Found a stove in the paper, the ad said it was a camper stove with oven for $50... I jumped on it and told Sandi about it considering we were gonna buy a new one today anyhow. So I called and called but no answer until about 3ish.. I was sweating it that we would lose the stove to someone else... mean while we hit a couple of rummage sales and snagged 2 tents, a bow quiver for Nate along with 3 arrows with broad heads, and a change counter for a big whoping 16 bucks... we also had to pick up a few other things from Lowe's so that I could rig the stove so that it would work using a propane tank and an old gas grill regulator... after all is said and done the oven doesn't work yet but the rest of it works like a charm... I feel accomplished today and think I can rest easy even though im now officially broke... 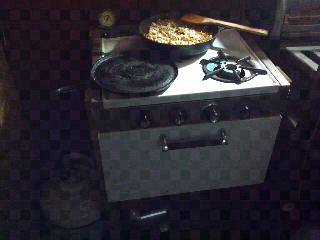 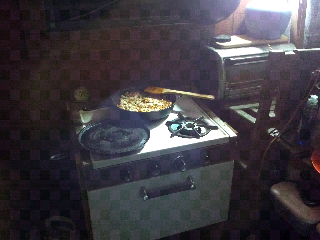